The Treasury committee has called for the government to include measures to address fraud via online advertising in the upcoming Online Safety Bill.

The call follows an inquiry into economic crime opened on 23 October 2020, aimed at reviewing the progress that has been made in combatting economic crime since the former committee’s inquiry on the subject in the previous Parliament.

The inquiry included HM Treasury, the Home Office, the Ministry of Justice, the Department for Business, Energy and Industrial Strategy, and Her Majesty’s Revenue and Customs (HMRC).

The Treasury committee said these new measures would be in the interests of preventing further harm to customers being offered fraudulent financial products.

The government should ensure that financial services advertising regulations also apply to online companies according to the committee’s report, and it should make sure that the FCA has the necessary powers to effectively enforce the regulations.

The report also said that online companies should not profit both from paid-for advertising for financial products and for warnings issued on their platforms by the FCA about those advertisements.

In addition, the report said that the government should ensure that regulators and law enforcement agencies have the powers they need to ensure that online companies provide them with information and comply with regulatory requirements. 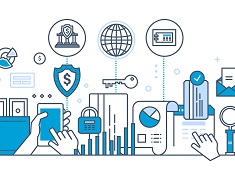