Bitstamp has appointed Julian Sawyer as its new chief executive.

He becomes only the cryptocurrency exchange’s second CEO, as co-founder and former boss Nejc Kodrič moves into a new role as a board member.

Sawyer brings more than 20 years of banking and FinTech experience, moving from being the UK managing director for US cryptocurrency exchange Gemini – a role which he only took up at the end of 2019.

In May 2015, Sawyer co-founded Starling Bank where he served as chief operating officer until last autumn. Prior to this, he has served as a consultant and advisor to other challenger banks and founded Bluerock Consulting.

Sawyer commented: “Cryptocurrency is at a pivotal moment with greater interest from institutional firms, regulators and central banks assessing the opportunities and an ever-evolving community of investors and traders.

“Bitstamp plays a critical role in helping all these stakeholders come together through our industry-leading technology and an unwavering focus on regulation.”

In 2011, Kodrič co-founded Bitstamp in a garage with €1,000, two laptops and a server. Since then, the firm has grown into one of the longest-running cryptocurrency exchanges in the world, and one of the largest by volume.

Kodrič stated: “After much thought, I’ve come to the conclusion that Bitstamp has already grown beyond what I envisioned it would become and it is time for someone else to expand this vision further.

“Although we’ve grown exponentially, it still feels like Bitstamp is just getting started – I believe we’re on the verge of great things, all of which entail bringing more financial freedom to millions of people around the world.”

Kodrič will continue to provide direction and play an important role in the future of the company, and was an active part of the search committee to find his replacement. 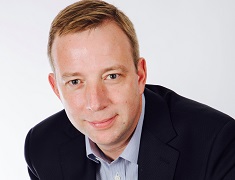